What is the endocannabinoid system?

In fact, you can say that the endocannabinoid system is one of the most important systems in the body because its main function is to maintain balance and homeostasis.

Where are the cannabinoid receptors located?

Cannabinoid receptors are found all over the body. They are everywhere – the brain, the spinal cord, the immune system, the internal organs, the peripheral nervous system, and even on the skin! In fact, the endocannabinoid system is the most widespread receptor system[ii] in the human body. 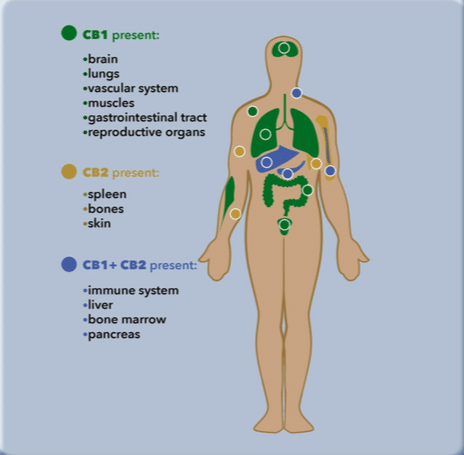 Stimulating the CB1 receptors produces a myriad of effects. It regulates so many physiological processes – sleep, memory, emotional responses, mood, appetite, temperature, among others. It can even regulate the sensation of pain.

Stimulating the CB2 receptors, on the other hand, produces widespread anti-inflammatory effects since they are mostly located in the immune cells.

There is the possibility that there is a third cannabinoid receptor, but its location and how it functions haven’t been clearly defined yet.

There are two main types of endocannabinoids. They are anandamide and 2-AG.

Anandamide is the most studied and activates the CB1 receptors to produce their beneficial effects. Unfortunately, anandamide is a short-order neurotransmitter. The body only produces this endocannabinoid when it needs it.

Also, anandamide doesn’t stay long in the body because it’s easily degraded by an enzyme called fatty acid amide hydrolase or FAAH. Whatever benefit we get from anandamide is short-lived because it is quickly broken down by these enzymes.

The same is true with the second endocannabinoid, 2-AG, which binds to both the CB1 and CB2 receptors. It’s also produced on demand but is quickly degraded by monoacylglycerol lipase.  And just like anandamide, its actions are also short-lived.

Our endocannabinoids, although important and beneficial, can be limited by their short lifespan[iii].

What is the importance of the endocannabinoid system?

As mentioned earlier, the endocannabinoid system is a very integral system that modulates almost everything within the body.

As you can see, your endocannabinoid system is responsible for a lot of important functions going on in your body!

The endocannabinoid system is the gatekeeper of homeostasis[v].

So how does the endocannabinoid system modulate almost everything?  How does it work?

Our cells communicate through chemical signals. When a stimulus stimulates a cell, it will trigger the presynaptic portion of the cell to release chemicals, be it hormones, neurotransmitters, special proteins, signaling molecules, etc. Now, the chemical signal will travel in a forward direction. It will go from the presynaptic cell, cross the synapse, and bind to its specific receptor on the postsynaptic cell. And on and on the signal will go until it reaches the brain. The brain will then release chemicals that carry the command for how the body will react to the stimulus.

Now this is where the endocannabinoid system really gets interesting.

And what happens next is beautiful.

Endocannabinoids, when they bind to their receptors, have the ability to modulate the neuron’s activity. This is how the endocannabinoid system maintains balance in the body.

Take for example a neurological disease. The result of too many excitatory neurotransmitters in the brain will cause the receptors to become overexcited and overactive. Because there is an imbalance, there will be a worsening of the disease. Case in point: stress and anxiety disorders.

Now the endocannabinoids, when they’re released and attach to their receptors, can tell the neuron[vii] to stop producing or stop absorbing the excitatory neurotransmitters. The neuron will listen and “calm down,” so homeostasis and balance are once more achieved in the body.

What this means is that even when a signal has already been fired by a neuron, endocannabinoids can still influence the neuron and change its response to the stimulus because of retrograde signaling. The endocannabinoid system is a like a guard always watching over your body, ready to take action anytime there is a disturbance.

Here’s another very interesting thing about our endocannabinoid system.

Now inflammation is good since it’s our natural and first-line-of-defense against irritants and pathogens. But sometimes, the inflammatory process can become overactive and worsen the medical condition, which effectively delays the healing process. In fact, there are numerous medical conditions worsened by inflammation

Now, endocannabinoids have the ability to inhibit inflammation[viii] by binding to the CB2 receptors of the cytokine-producing immune cells. When these receptors are stimulated, they produce widespread anti-inflammatory effects by causing the apoptosis (cell death) of the immune cells. With the immune cells inactivated, there will be no more production of cytokines.  Inflammation is controlled and proper healing can start.

Free Shipping for Orders Over $50